My goal is to install energy monitors in and around my neighbor’s breakout boxes.  Even at it’s simplest install, mucking around within a person’s home electricity is not something people will easily agree to.  One hurdle is the installation.  The HappyDay Energy Monitor PCB must implement the easiest possible installation and maintenance in North American houses. To achieve this, I decided to evolve and adapt Tisham’s Dhar’s excellent work described in the “Thanks to Those That Went Before” section below.

As I write, the Kicad files involved in PCB Layout have been sent to OSH Park. Parts have been ordered from DigiKey. I am excited to solder the chips to the PCB and see how far I can get before I botched something in the design or layout. In the past, it has taken me 3-4 iterations to get a fully working PCB. Certainly, my goal is to take less iterations. However, I do not kid myself into thinking I got everything right for what I call this sacrificial draft. I have learned it is best to finish the design/layout then iterate as soon as possible to understand better what I am doing :-). As far as the expense, it would cost me far more to take a course. Besides, I am not a great learner within a structured environment.

The goal of this post is to document what I have learned after finishing the initial schematic and Layout of the HappyDay Energy Monitor PCB.

Thanks to Tisham Dhar’s excellent work, I have a firm schematic foundation on which I will build.  Prior work I will explore, evolve, and adapt include:

I have also paid for some consulting time from Tisham which has already had a significant benefit in my knowledge and ability to finish this project.  Tisham has a tremendous amount of knowledge on measuring energy and using the atm90e26.  He is extremely helpful and has the rare ability to clearly explain his choices and concepts.

The HappyDay Energy Schematic I reference/am working on is located at this GitHub location.

The schematic is separated into two areas:

Power Coming From The Grid

As we can see from the diagram below:

In our North American homes, 120Vcomes in through two power lines (L0 and L1).  A third line (N) acts as the reference point (analog ground) for voltage/current measurements.  Here is my evolution of the Tisham’s din_power schematic for this part of the circuit:

The parts used are noted within the PN field of the component within the schematic.  The reason the rather large 1206 size is used is to get chips that work well in high voltage scenarios.

Clamping Down on Noise

The MOVs(Metal Oxide Varistors) on L0 and L1 clamp down on the voltage coming in when there are power surges.  Most of the time, voltage in North American homes oscillates from 0 to a peak voltage of 169 volts.  Sometimes this oscillation is disturbed by a spike in voltage caused by a lightning strike or perhaps switching in the power grid:

The ferrite bead clamps down on the high frequency noise that is coming in the N line.

Connecting to the Circuit Breakers

The connector/cable going from the energy monitor to the circuit breakers is modeled after the one used by the Sense monitor:

This is why there are 4 pins instead of 3. So that a molex connecter can easily be used.

The Open Energy Monitor project has great info on the how and what of voltage sampling.  The upper part of the voltage divider used to scale the voltage has four resistors in series.

I asked Tisham about this.  He said this way, if any one of the resistors breaks down, the full 120V won’t be sent to the rest of the circuit.  Tisham also noted the resistors need to be rated to handle the incoming voltage (in my case 120V…but to be safe probably 240V rated resistors are a better thing to use).  When building the voltage divider don’t forget the info in the atm90e26’s data sheet.  The pins that are for voltage sampling (15 and 16): …are differential inputs for voltage. Input range is 120μVrms~600mVrms… The maximum reading Vout can be for Vrms is 600mV.

The values for the resistors weren’t entered.  Since 600mV is the highest that can be read, and the lower resistor is 1K, the upper resistors must add up to 199,000 to fit the voltage divider formula:

To get to DC power, one of the L Lines and the N line acts as input into a SMPS.  Tisham’s schematic uses a Hi-Link SMPS.  As I researched SMPSs, I became concerned with the safety of using Hi-Link’s, particularly after reading Skippy’s Random Ramblings.  It will cost me a lot more.  On the other hand, I am hoping to live past this project.

(Note: Values for the capacitors come from the RAC03-GA data sheet.)

I picked one that:

After getting to a circuit that provides regulated +3.3VDC, the circuit plugs into a DC-DC isolator.  This way, the DC power to the Feather does not interfere with the ATM90e26’s measurements.  In addition, the ground potential is set at an equivalent distance.

Two Current Transformers (CTs) are needed to get current readings on the two 120V lines.  The CTs use a TRS 3.5mm audio jack as the connector to the electronics.

The way the ATM90e26 samples current is different than the example Arduino sampling on the Open Energy Monitor web site.  Pins 10 and 11 of the atm90e26 (the current reading inputs for I1P and I1N) are differential inputs.  This means there is no DC bias in a schematic using the ATM90e26.  I ran an LTSpice simulation to best understand the OEM design: 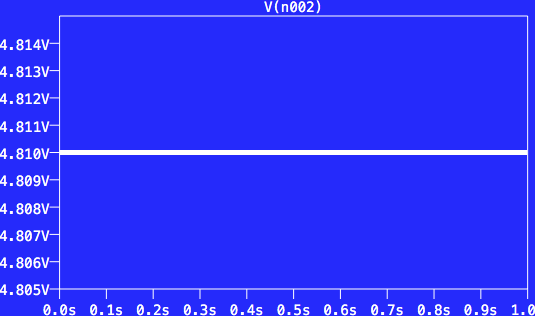 In this simple run, we can see:

Here is the schematic design I have for the I1N and I1P inputs:

I started by testing L0_SAMP.  I placed the chips needed to get through this part of the circuit:

The biggest challenge I had with soldering the chips onto the PCB was getting the Varistor on.  The chip has a fat plastic body with what I consider to be iddi-biddy pads.  Not only did this make it hard to solder the chip, but also it was easier to “break off” the PCB since the body was far bigger than it’s iddy biddy pads:

If I recall, the Vpp fits within the maximum for the ATM90e26 of 660mV.  What I don’t know is how to interpret 456mV…what does this mean? Hmmm…. I’ll get to that after a bit more testing….

My next test point was adding on the chips that transforms one of the 120VAC lines into a decent 3.3VDC line:

The protagonist in the above shot is the rather large and expensive RAC04-3094-5-ND.  If the circuit is working, the green LED should go on.

On further inspection, I’m pretty sure the break in the circuit was caused by something that I did that in hindsight was incredibly stupid. The holes for the poly fuse are too small.  So I punch bigger holes…and well…cut through the circuit:

This post is about evolving the energy monitor firmware to use Python instead of the Arduino IDE.  It’s been awhile since I discussed the pieces of this project.  Most of this post is about the firmware running on the Energy Monitor.

Here is the “bigger picture” of the HappyDay Neighbors prototype:

The prototyping environment Circuit Python enables makes me smile.  It is for this reason I evolved the environment such that the Energy Monitor:

The goal of this post is to run a Circuit Python script on the Huzzah that publishes energy readings to an mqtt broker.  I want to document what I have done to ensure I and others can have the opportunity to not repeat my bumblings or gain a spot of insight that shortens the amount of time to get a prototype out.

There is a Python Script running continually on the Huzzah and on the Raspberry Pi.  The Huzzah’s script is using mqtt to publish energy readings.  The Raspberry Pi subscribes to the mqtt messages and then appends them to a local file.

NOTE: The challenge at this point is stopping the While True: loop so we can fix the code as needed.  The code does nothing to allow us to cut in.  Rather, it runs continually…sleeping for some amount of time and then taking another reading.  When I was trying to access the Huzzah with main.py running using ampy, I got:

ampy.pyboard.PyboardError: could not enter raw repl

What to do? What to do? ( First, I thank @deshipu on Adafruit’s circuit python).

Yippee!  there is no longer a main.py…so now I can get into ampy!

The Raspberry Pi is running the mosquitto mqtt broker.

This will create and add energy readings to the HappyDay_Readings.csv file in the same directory as the python script.
It is easy to get the CSV file onto another file store by using sshfs.  I discuss how to set up sshfs in this post.

Here is a link to a Google spreadsheet that contains the readings. A previous post describes taking energy readings in North America and why there are two voltage, current, etc. readings.  This is why there is a v1 and a v2…etc.

A very HAPPY time.  It works…. at least for now :-).  Thanks for reading this far.  Please find many things to smile about.

The goal of this post is to document the steps I took to send an mqtt message from a Feather Huzzah to a Raspberry Pi.

The umqtt.simple library is located here.   I copied the contents to my local folder as umqtt_simple.py on my Mac for editing with Atom.

The DNS name of my Raspberry Pi is ‘raspberrypi.home’ …I found this by looking at the IP addresses in Angry IP.

I had installed the Mosquitto broker on the Raspberry Pi.  To better understand traffic, I started mosquitto in the verbose mode.

I left the window I started mosquitto in open so I could watch the mosquitto messages fly by.

ooh! Looky looky…port 1883!…I guess this means mqtt connections come in as SSL….

Isn’t right…so I replaced it with:

I seemed to only have to do this once…I would think I should try connecting every time I start an mqtt conversation…I thought this python code was a “nice and robust” way to include connecting to the wifi.

Anywho, I assume you know how to connect to a wireless network with micropython/circuitpython…

I started up the mqtt client on the Raspberry Pi:

I then used ampy to run this small test program (mqttTest.py):

(Include the port number in the call.  I don’t understand if the Raspberry Pi is using 1883 and NOT assuming SSL?…)

I also had to comment out these lines from umqtt_simple.py:

Seems to be working.  Thanks for reading this far….please find many things to smile about.