An Arduino project that automatically waters plants has been done many times.  This summer I finally decided to tackle on my own.  I’m writing up my first attempt at this project in two posts:

I say first attempt, because as I finish up this attempt I can see several areas where improvements can be made.  I mean, whoa.  I had no idea what the difference between measurements using two galvanized nails versus a sensor used by horticultural researchers….and if the idea is only for watering my backyard vegetables and not a cash crop – how much do I care?   So…what is the best my auto watering solution needs to be?

The Arduino and Fusion 360 files are available at this GitHub location.

The stuff I will build for this project include:

This is what I’ll be calling the enclosure and the stuff inside that sends moisture readings.  The TX Box includes:

The moisture sensor has three clearly marked pins, one for GND, VCC, and data.  The instructions consist of a sentence on the eBay page: Output voltage :0-2.3 V [2.3V is completely immersed in water] voltage, 5V power supply, humidity, the greater the output voltage increases. 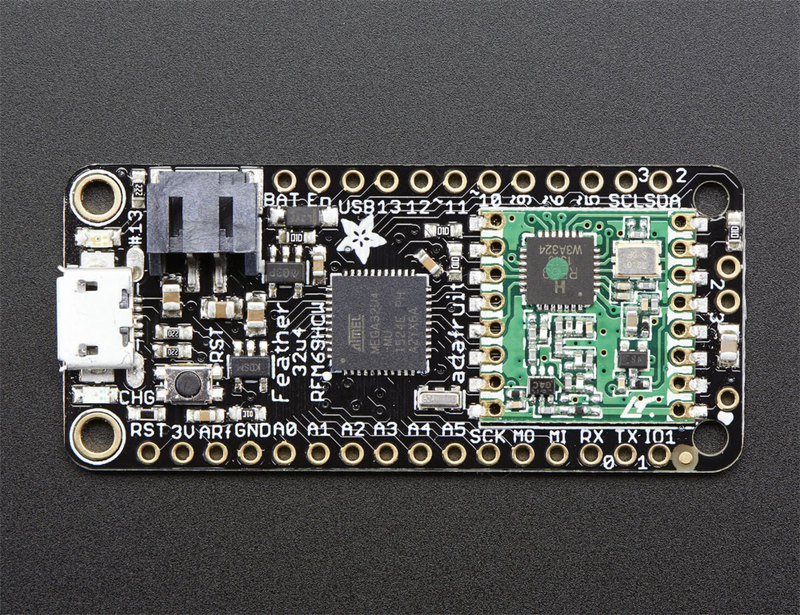 I’m not going to detail the design or printing.  I will however point out some of the “best practices” I am evolving in my knowledge and practice of 3D printing design and print:

I found the Fusion 360 model for the Feather here.

I had no previous experience using a 32u4 based board with the Arduino IDE.  “Those that went before” know there is a hardware difference between the Arduino Uno and the Feather that “bit” me in the handling of serial ports.  Buried a bit in Adafruit’s documentation is this info gem: “…UNO-type Arduinos have a seperate serial port chip (aka “FTDI chip” or “Prolific PL2303” etc etc) which handles all serial port capability seperately than the main chip. This way if the main chip fails, you can always use the COM port. M0 and 32u4-based Arduinos do not have a seperate chip, instead the main processor performs this task for you. It allows for a lower cost, higher power setup…but requires a little more effort since you will need to ‘kick’ into the bootloader manually once in a while.”

Manually restarting the boot loader is one of the behavioral differences discussed in Adafruit’s documentation .

The other is when the Serial port becomes available.  I wasn’t able to get Serial.print()’s in Setup() until Mike in Adafruit support pointed out:

before you call Serial.begin()?That will make the code wait until the USB registration has finished before trying to print anything.

This race condition is noted in the if(Serial) Arduino documentation.  Looking back, I should have looked into why the examples that used the Serial functions started in setup() with while (!Serial);  instead of deleting because I didn’t have an understanding why it was there.  A D’OH moment on my part.

The data received is the same as the data sent.  Two additional pieces of info are used that come from the RFM69CHW firmware:

The experience scatters one or more rechargeable batteries around my garden.  I want to minimize the time between having to recharge the battery (or batteries).  Stuff I want to optimize to meet this goal include:

Minimize Power Used By the Feather

Minimize Power Used By the Radio

You Are Getting Sleepy….

When transmitting the packet within the transmitReadings() function, I make a call to radio.sleep().

As noted in Adafruit’s Feather documentation under Radio Power Draw :  “If you put the radio to sleep after transmitting, rather than just sitting in receive mode, you can save more current, after transmit is complete, the average current drops to ~10mA which is just for the micro controller.“

This line in the sketch:

I’m assuming (note: I haven’t validated) the reason given in this post is correct: “…the rfm69hw puts increments power in one db steps from power settings 0 to 15, then starts over at 16 and increments up again from 16 to 31.”

I tried a variety of tests where the radio of the TX box was set at a variety of power levels and determined given the distance, I needed to leave the power level at the highest setting.

For this prototype, the only thing I am doing to limit the number of data packets sent is to send at a period of 32 seconds (instead – for example – every time through the loop() ).  POSSIBLE SECOND PROTOTYPE IMPROVEMENT: Send a packet only upon request of the Receiving Station.  There is no point to sending packets unless the TX box is asked for an update since the intent is to take action and water (or not) depending on the moisture sensor reading(s).

ßHere is an image of an example run:

A moisture reading in the 500’s means the soil does not need watering.  But more on making a decision based on readings in the next post.

I’ll collect all the improvements I noted above to be considered for an evolved prototype: