It’s all too easy for me to overlook the efforts by amazing folks.  I find though when I stop and express gratitude, I am much happier.  More at peace.  So for purely selfish reasons, I thank:

The Arduino code for the Moisture Puck and the Controller (v3) can be found at this GitHub location.

It is unacceptable to recharge the battery after 3 days.  The Moisture Puck was burning on average about 25mA.  Given the Feather is powered by a 2000mAh LiPo, the back of the envelope calculation (2000/25/24 = 3.3 days) is “close enough” to what I observed when the Moisture Puck was in the soil sending measurements to the Controller.

While this is a significant improvement, it is still higher than it need be.  I’ll save more power reduction exploration for a later time.

An essential tool for this exploration is Adafruit’s nifty INA219 Current Sensor Breakout. I modified a USB cable so that I could insert the INA219 into the power side of the circuit over USB. 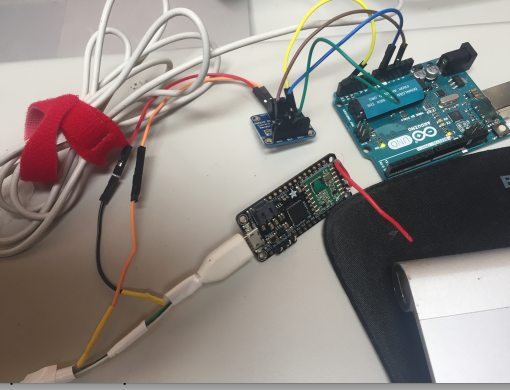 I hooked up the INA219’s I2C to the Arduino and run the getCurrent.ino sketch (found in Examples that come with the INA219 library) on the Arduino.  I suppose I could have more easily measured current through the battery (by more easily I mean I wouldn’t need to hack up a USB cable).  However, using the USB port for building/debugging is easier.

I would think deep sleep would draw less power (around 700µA?) and the 5mA spikes are suspicious.  I assume there are peripherals (e.g.: Flash) that are still on needlessly sucking up power.  For now, I’ll let that go to allow exploration into other areas that I’d like to improve on.

Turn Off the Moisture Sensor

One thing I noticed that was like “oh – right – duh” was the moisture sensor was being powered by the 3.3V pin of the Feather m0.  It was on all the time.  As noted by Chris Ruppel in his “Arduino soil moisture sensor” blog post, only send power to the sensor when actively taking a reading of the soil moisture. Powering only during these short moments helps avoid corrosion caused by the constant flow of electricity between the two pads of the sensor.

I attached the v+ of the moisture pin to pin 12 of the Feather and now turn the pin HIGH right before measuring then back to LOW after measuring.  Much better.

This version of the firmware is – happily – simpler. 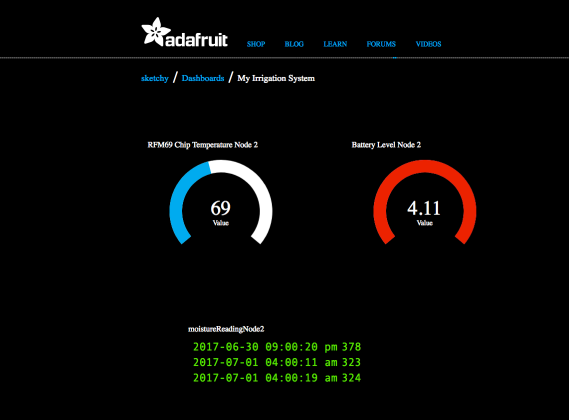 That’s it for the update.  Please see the GitHub location above to get the code.  Thank you and please find many things to smile about.